Varanasi is the most visited divine tourist destination in India. Owing to its immense religious significance and scenic ghats along river Ganges, the gullies and lanes of the city are buzzing with unceasing tourists and pilgrims all year round.

To make things easier for the expats and residents of Varanasi, the government as well as private sectors have come up with various modes of transportation that makes traveling in and around the city easier, comfortable and inexpensive. Like any other tourist destinations of India, Varanasi too is loaded with various automobile options such as state and private bus, cycle rickshaws, auto rickshaws or tuk tuk and tempos that can be availed at a very nominal price. However, if you are in a mood to explore the scenic ghats of Varanasi, you have to use your legs for transport as vehicles are not allowed after a certain distance. Motor bikes are, however, allowed in these areas. From Varanasi railway station to the ghats, auto rickshaws will charge you around Rs 20 which is less than a dollar. 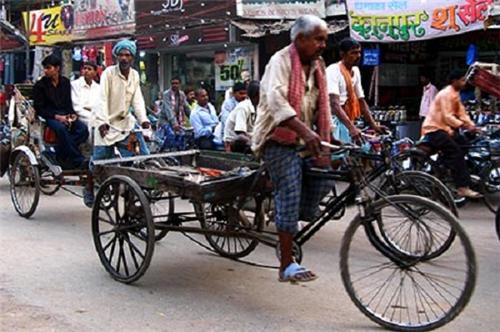 Since a major portion of the city is filled with narrow lanes and alleys, it is not possible to make way for big buses. The best way to travel around the city is through auto rickshaws, cycle rickshaws and hired motor bikes. But always make sure to bargain and fix a price with the auto-rickshaw driver before you hop on to the vehicle.

Taxis are also available in Varanasi, but before hiring a taxi ensure that your hotel can be reached in a taxi. Since most of the drivers are well versed in English, foreign tourists will find not difficulty in haggling or getting around the city.


If you want to travel to the outskirts of Varanasi, there are a number of buses and mini-buses of Uttar Pradesh State Road Transport Corporation (UPSTC). Established in 1947, UPSRTC has a number of bus services that travels from Varanasi to outskirts cities of Varanasi and vice versa. Both air-conditioned and non-air conditioned buses are available and you can book the tickets online to save time consumption. Chunar, Sarnath, Jaunpur, Chandraprabha Wildlife Sanctuary, Kaimoor Wildlife Sanctuary are some of the nearby tourist attractions of Varanasi and UPSRTC buses to these sites are available from Varanasi bus stand. UPSRTC buses for within city site-seeing are also available.


Varanasi houses a number of transport companies and agencies that supplies carriers such as trucks, Lorries, buses and other vehicles that are required to transfer loads and luggage from one place to another.

Here’s a list of well-know transporters in the city that deals with transporting goods: